I’ve received an eARC for an honest review. I’ve had such a great time trampling in the swamps and roaming with TJ, Sam, and Rex. This middle-grade book is surprise I’ve been waiting for. It made me jump back in to my younger self, and I was sad to read the last page!

I’m thrilled to be a part of Rex‘s blog tour. So here we go! 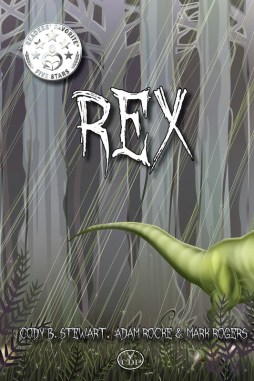 Rex by Cody B. Stewart, Adam Rock, and Mark Rogers

When eleven-year-old TJ finds a weird looking egg in the Florida Everglades after a tropical storm rips through, naturally he takes it home for identification. It could be the egg of a mutant duck or something, which would be awesome. Problem is, the egg doesn’t look like it came from a mallard, even a mutated one—it’s too big and heavy and…strange. So he hides it away in his closet and continues on with his life as usual, doing his best to ignore the creepy men constantly banging at his front door and the significant rise in military helicopter sightings in his typically quiet neighbourhood.

Then one day he comes home from school and it’s as though a cyclone has ripped through his bedroom. Suddenly, TJ knows he’s dealing with something a little more interesting—and a little more deadly—than a duck.

“Nothing really exciting ever happened in Greenmarsh.”

With a sprinkle of Jurassic Park and a dash of E.T., Rex throws you into a coming-of-age journey where an adrenaline-filled boy stumbles upon a T. Rex egg and uncovers a sinister government cover-up.

I don’t read many middle-grade books, but when I had the opportunity to get my (digital) hands on this one, I wasn’t expecting Rex to get me hooked so quickly! The little girl in me who dreamed of owning and training a raptor wanted to see where this story goes (Star Lord, eat your heart out).

Rex reminds me of Ray Bradbury’s The Halloween Tree and the movies E.T., The Goonies, and Jurassic Park. It has a strong 90s feels to it, even though the book’s setting is in the present time. I felt as if I’ve stepped back into my scuffed sneakers, dropped my Nano Kitty into my pocket, and, this time, looked for my very own T. Rex. I’ve read only five books that transported me back to my crazy childhood, so I’m happy to take that trip again.

“Oh man, I’m probably breaking so many dinosaur etiquette rules right now…but I really wish I could’ve gone out in some way that didn’t involve being digested.”

TJ––a typical eleven year old who wants a dog and hopes for the trio of goons to stop bullying him––is an only child to a single mother, who works several jobs just to keep the roof over their heads. He and his best friend, Sam, are practically joined at the hip. While they’re out on a Cub Scout scavenger hunt, he discovers an egg. But when the army rolls in to his small town, Greenmarsh, he knows what he really finds is a lot more than an egg. The army gets closer to him and the dinosaur affectionately named Rex, and TJ realizes he has to sneak Rex out of the town to protect him. How? Through a science fair, of course.

“Never talk about swamp people before Mom’s had her coffee.”

The humour in Rex will hook you from the beginning. Rex appeals to all readers. The 30-year-old nerd will fall in love with TJ, Sam, and Rex, just as much as the 12 year old will. It also offers you an authentic taste of what a true family is. But in this case, this family is an eclectic bunch: a Doctor Who-fanatic mom, a boy who loves to tinker, a protective friend, and a loyal, cold-blooded, and adorable dinosaur, a substitute for a dog.

TJ’s mom, Ellen, and TJ have a genuine bond that many readers can relate to. They banter. They argue. And they protect one another when the other doesn’t realize. He also brings out the kid in her. She gives everything for her little man and is willing to give more to see that smile on his face. Their relationship shines for me. It reminds me of mine with my Mom.

Rex is an enchanting story that transports you back to your childhood and stomps its way into your heart. I highly recommend this book to any reader! I can’t wait to step back into Greenmarsh again.

Goodreads | Indigo | Amazon CAN | Amazon US