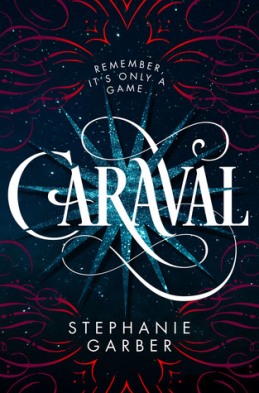 Scarlett has never left the tiny island where she and her beloved sister, Tella, live with their powerful, and cruel, father. Now Scarlett’s father has arranged a marriage for her, and Scarlett thinks her dreams of seeing Caraval, the far-away, once-a-year performance where the audience participates in the show, are over.

But this year, Scarlett’s long-dreamt of invitation finally arrives. With the help of a mysterious sailor, Tella whisks Scarlett away to the show. Only, as soon as they arrive, Tella is kidnapped by Caraval’s mastermind organizer, Legend. It turns out that this season’s Caraval revolves around Tella, and whoever finds her first is the winner.

Scarlett has been told that everything that happens during Caraval is only an elaborate performance. But she nevertheless becomes enmeshed in a game of love, heartbreak, and magic with the other players in the game. And whether Caraval is real or not, she must find Tella before the five nights of the game are over, a dangerous domino effect of consequences is set off, and her sister disappears forever.

“Welcome, welcome to Caraval! The grandest show on land or by sea.”

I reserve a five-star rating for these rare books that seep in and take hold of my heart. Sometimes words can’t convey my thoughts on a book, and right now, I wonder if I can grasp onto my emotions after reading Caraval. Caraval is a treat for any YA enthusiast. It tickles your senses, captures your heart, and takes a hold of your wildest imaginations.

Scarlett Dragna, the daughter of a brutal governor, dreams of attending Caraval, an annual performance where the participants take part in the festival. When tickets arrive for her and her sister, Donatella, Scarlett still sees that her hope dies because of her upcoming wedding. Tella has other plans though. She and Julian, a mysterious sailor, snatch Scarlett away. But Caraval is more than meets the eye. Legend, the Caraval master, kidnaps Tella. And Scarlett and Julian have only five nights to find her so they can win the game.

But this story is not just a carnival-themed novel. It blossoms into something more magical than parlour tricks. At the centre of this thought-provoking story is the bond of sisterhood.  I adore Scarlett. She endures many trials in Caraval. Her sister fuels her strength, her courage. She’s willing to give up everything for Tella, and I admire her determination and relate to her pain. She makes me wonder what I’d do for my family.

At first, I thought Tella is brash, reckless, and thoroughly selfish. I was mostly wrong, and rightfully so. Yes, she may exhibit some of these traits. However, she protects her older sister, just like Scarlett does for her. They both offer a unique dynamic, yet it’s an often used one, though. Scarlett is the mature, motherly type, and Tella is the rash one. They must be since their father abuses, threatens, and often uses them against each other. But their strength rises above their pain.

The world building doesn’t stay true to normal books. The reason why is that Caraval takes centre stage here. It becomes the world itself. You don’t see much of the outside world, but I enjoy that detour. Stephanie entwines snippets of Caraval’s and Legend’s history into the story. What is real? What isn’t? Is what you’ve heard a rumour? Or is there some truth within the lie? You don’t know until the very end. But the way Stephanie weaves this story will keep you up throughout the night.

“Every person has the power to change their fate if they are brave enough to fight for what they desire more than anything.”

Fate, fear, hope, and choice play heavily in Caraval. Stephanie incorporates these attributes in almost every chapter, and they just make for a beautifully written world. Her work forces you to question what you’re willing to do in this situation and what you’ll give up.

Caraval has captivated me, and I feel as if I cannot fully express my appreciation for it. At the beginning, I was hoping for magic, imagination-filled adventures, and, well, hope for these sisters, but Caraval gives me so much more. It shows me that people can hold onto hope so as long as they believe. So pick it up and jump in. It won’t disappoint.

“Hope is a powerful thing. Some say it’s a different breed of magic althogether. Elusive, difficult to hold onto. Not much is needed.”

More about the Author

Stephanie Garber loves Disneyland because it’s the one place on earth where she feels as if the fantastical stories she loves to write about could actually come to life. When she’s not writing young adult fantasy, she teaches creative writing at a private college in northern California, where she’s known for turning assignments into games and taking students on field trips that involve book signings. Caraval is her first novel for young adults.