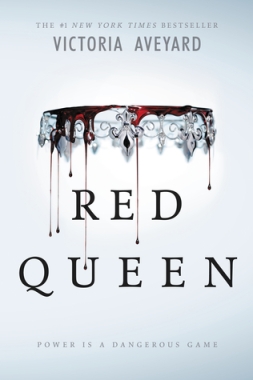 This is a world divided by blood – red or silver.

The Reds are commoners, ruled by a Silver elite in possession of god-like superpowers. And to Mare Barrow, a seventeen-year-old Red girl from the poverty-stricken Stilts, it seems like nothing will ever change.

That is, until she finds herself working in the Silver Palace. Here, surrounded by the people she hates the most, Mare discovers that, despite her red blood, she possesses a deadly power of her own. One that threatens to destroy the balance of power.

Fearful of Mare’s potential, the Silvers hide her in plain view, declaring her a long-lost Silver princess, now engaged to a Silver prince. Despite knowing that one misstep would mean her death, Mare works silently to help the Red Guard, a militant resistance group, and bring down the Silver regime.

But this is a world of betrayal and lies, and Mare has entered a dangerous dance – Reds against Silvers, prince against prince, and Mare against her own heart.

I read Red Queen last year, and it has stuck with me ever since. I took a risk with it because I was hesitant to fully get into YA. Sure, I’ve read some YA series, but I hadn’t dedicated enough time to the genre and wasn’t sure how I’d enjoy it. But sparks have flown. And I am hooked.

Mare Barrow, a Red living in the impoverished Stilts, is thrown into a politically charged world when the Nortan nation discovers she posses powers. The King hides her among the Silvers so they won’t discover her true identity. Once he transforms her into a long-lost Silver princess, she swears allegiance to the Resistance. When she does, she puts her world in chaos.

Victoria blends together dystopian and high fantasy into a captivating universe. While you’ll see old relics from the former country, she creates a world entirely her own. Fear, death, and slavery govern the poor while the royals live in grandeur but fear political turmoil. The hierarchy stays prominent throughout Red Queen. People are either Red, who are humans, or Silver, whose silver blood provides otherworldly abilities. But Victoria throws in a divide in the Silvers by creating a sub-hierarchy. I enjoy the change in society. Instead of the Silvers fighting oppression and starvation, they dominate the Reds. But, as we all know, humans push back, and you see the first inklings of a revolution.

Victoria has written an enthralling tragedy. Our society doesn’t exist. Our history is lost. And another race has risen out of the ashes. What strikes me the most are the character relationships, politics, and family. The story dug in to my mind and stayed there days after finishing it. She also hasn’t put in a lot of teen angst, and I have to thank her for it. Her characters are also authentic to her world.

“I told you to hide your heart once. You should have listened.”

Mare, who posses the ability to create and to control lightning, loses her fate, her life, and her choice. The heroine encounters manipulation and betrayal at every step. She’s forced to summit to the Silver King, who demands her to marry his second son, Maven. He pits her against her own kind. So she must play princess, or she faces a deadly future. I liked her sarcasm and strength. But I find that she needs some character development.

Cal, the heir to the throne, extrudes filial piety. He’s an intriguing character. His crown has mapped out his life. But how can he change an already predesigned fate? He can’t. The attraction between him and Mare balances out the story, and it’s rather sweet. But his loyalty will test them.

Maven lives in his brother’s shadow and under his mother’s control. I find him a conflicting character who I can’t seem to wrap my head around. But somehow I see his humanity, which confuses me even more.

The political tension in Red Queen is superb. Victoria weaves in current political issues into her debut novel. The Scarlet Guard, a rogue Red organization looking to overthrow the current government, sparks my interest. While it’s a strong opponent for the King, Victoria doesn’t quite lift the veil, making it more mysterious. What I look for in a book is how much I hate certain characters. And I can’t help but loathe the weak King, Evangeline, and Elara, Maven’s mother. You know you’ve written convincing antagonists when I wish for their deaths.

She has written a compelling multi-layered story that triggered my love for YA. Yes, Red Queen is a typical dystopian novel with some clever twists. And it does give off a “special snowflake syndrome” vibe. The politics and human resilience help with some of the drawbacks, though. But I see past the issues a debut novel will contain. Her writing draws you in. Her characters are engrossing, and her hidden message will speak to you.

“I am finally learning my lesson, Anyone can betray anyone.”

What are your thoughts on Red Queen? Do you like the change from supernaturals being the oppressors? Let me know!