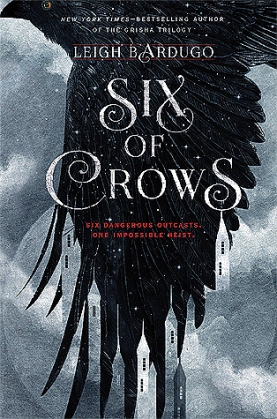 Six of Crows by Leigh Bardugo

Ketterdam: a bustling hub of international trade where anything can be had for the right price—and no one knows that better than criminal prodigy Kaz Brekker. Kaz is offered a chance at a deadly heist that could make him rich beyond his wildest dreams. But he can’t pull it off alone…

A convict with a thirst for revenge.

A sharpshooter who can’t walk away from a wager.

A runaway with a privileged past.

A spy known as the Wraith.

A Heartrender using her magic to survive the slums.

A thief with a gift for unlikely escapes.

Kaz’s crew are the only ones who might stand between the world and destruction—if they don’t kill each other first.

“No mourners. No funerals.”

Once you read the first page, Leigh throws you in a dark and gritty landscape that you know you should leave but are just too tempted not to. I’ve been waiting for this kind of wickedly charming book for years.

When a mercher enlists his help to break out a hostage held in the Ice Court, Kaz Brekker, Katterdam’s criminal mastermind, knows he can’t pass up this impossible heist. To do so, the Bastard of the Barrel finds the most intriguing bunch of street rats Katterdam has to offer.

When I started reading Six of Crows, I hadn’t known of the Grishaverse. I heard of it, but I walked in to this series with no expectations, no previous knowledge of this expanding world. So starting this new series grew into a complicated learning curve. However, I was up for the challenge. I’m in love with Leigh’s world building. Leigh creates these complex layers that are more satisfying than the last. She takes the characters’ history and blends it in to the present, seamlessly converging both into a thrilling narrative. She’s one of the few authors who keep me guessing. And she concocts such masterful and suspenseful plot twists.

Kaz leaned back. “What’s the easiest way to steal a man’s wallet?”
“Knife to the throat?” asked Inej.
“Gun to the back?” said Jesper.
“Poison in his cup?” suggested Nina.
“You’re all horrible,” said Matthias.

How can I gush over these characters more? I can’t. Well, I can, but doing so might be borderline obsessive, if you ask me. Leigh merges each POV perfectly. I don’t like many POVs, but she creates six authentic voices. At the centre of this chaos is Kaz.

“You love trickery.”
“I love puzzles. Trickery is just my native tongue.”

Kaz, the monstrous Bastard of the Barrel, transforms into the backbone of this band of misfits. The ghost of his brother, Jordie, haunts, taunts, and fuels him to ruthlessly seek out their revenge. I can’t help but adore him. Similar to Kaz, I cannot stand when strangers touch me. His hatred of human touch is more extreme than mine, but I completely connect with him. His past seeps in and controls his present and future. And God, he’s the most conflicting character I’ve ever read, but I love him so much.

“I will have you without armor, Kaz Brekker. Or I will not have you at all.”

And this demon needs his Wraith. Inej, a Suli acrobat, wants nothing more than to find her family. Her religion grounds her while she maneuvers through Katterdam and tries to forget her time in a brothel. Her past shames and also haunts her. The tension and the relationship between her and Kaz are precious.

“Oh, I see. I’m the wicked Grisha seductress. I have beguiled you with my Grisha wiles!”

Leigh blesses our neglected world with Nina, a Heartrender who has a debt to pay. Her past mistake feeds her. And she’s determined to break Matthias out of Hellgate. She is still a Grisha soldier though, even though her duty conflicts with her feelings for him.

“I have been made to protect you. Only in death will I be kept from this oath.”

Matthias is a former Drüskelle who seeks retribution. His loyalty to Fjerda sometimes infuriates me, but Leigh shows you how divided this universe is. Drüskelles hunt Grishas, who they believe shouldn’t exist. Grishas, who possess supernatural abilities, crave revenge. And being betrayed by a certain someone still doesn’t sit well with him.

Jesper, a sharpshooter who can’t escape his gambling ways, is an iffy character. I didn’t see a lot of development with him. However, his loyalty to Kaz jumps off the page and intrigues me. Wylan, a mercher’s son with a gift for blowing things up and a past to hide, sticks out from this ragtag team. He doesn’t fit in with thieves, murderers, and soldiers. Yet somehow he’s a perfect fit for them though.

The ships in this book will put me in my grave. But God just let them all sail.

Leigh incorporates current issues from our world. Slavery and human trafficking not only exist but also thrive. They’ve turned into Katterdam’s dirty secret and currency. She has built a convincing and sinful world. And while it is fictional, I feel as if I can walk down the Barrel and see this wicked city for what it is. But she also brings a human touch to the story. Both Kaz, who loses his brother, and Inej, who was sold as a sex worker, battle PTSD. She masterfully presents this mental illness and champions it. She doesn’t shy away from it. She makes it shine.

Six of Crows is a deviously delicious novel. It immerses you into a world that may just scare you, yet she skillfully hooks you from the first time you walk down the Barrel and will surprise you until the betrayal and ultimate sacrifice. So don’t be surprised if you’re asking for more.

What do you think of this series? Do you prefer it over the Grisha series? Or has it convinced you to read Leigh’s first one?