To end a civil war, Lansera’s King Turyn relinquished a quarter of his kingdom to create Medua, exiling all who would honor greed over valor to this new realm on the other side of the mountains. The Meduans and Lanserim have maintained an uneasy truce for two generations, but their ways of life are as compatible as oil and water.

When Vesperi, a Meduan noblewoman, kills a Lanserim spy with a lick of her silver flame, she hopes the powerful display of magic will convince her father to name her as his heir. She doesn’t know the act will draw the eye of the tyrannical Guj, Medua’s leader, or that the spy was the brother of Serrafina Gavenstone, the fiancee of Turyn’s grandson, Prince Janto. As Janto sets out for an annual competition on the mysterious island of Braven, Serra accepts an invitation to study with the religious Brotherhood, hoping for somewhere to grieve her brother’s murder in peace. What she finds instead is a horror that threatens both countries, devouring all living things and leaving husks of skin in its wake.

To defeat it, Janto and Serra must learn to work together with the only person who possesses the magic that can: the beautiful Vesperi, whom no one knows murdered Serra’s brother. An ultimate rejection plunges Vesperi forward toward their shared destiny, with the powerful Guj on her heels and the menacing beating of unseen wings all about.

Destiny awaits these three characters. With a good dose of fantasy and a danger that threatens two countries divided, Wings Unseen will keep you guessing until the very end.

With a kingdom split in two, three people—Vesperi, a noblewoman who possesses a lethal power; Janto, a prince; and Serra, the fiancée to the prince and a seer—must work as one to fight an evil that jeopardizes both their countries. But their shared fate faces a deadly path, and they must set aside their turbulent past in order to save their people.

Getting into this story was somewhat hard for me, and writing this review may prove harder. But the overall story sounds intriguing, and the cover hooks you in immediately. And while Wings Unseen is the author’s debut novel, it contains some good aspects for an interesting novel. Rebecca has captured the character’s voices rather quickly. And her writing also improves throughout the book and seizes your attention so you want to read more and find out what happens next.

The characters and their development are the highlights of this story. And I enjoyed how Serra, Janto, and Vesperi transform. However, I find the relationship among the three convoluting. The one character who stood out from this confusion is Serra, and surprisingly I sympathize for her because of the path she must travel. Giving up the man she loves so she can save her people, only to watch him fall for the woman who kills her brother, made me tear up. But I enjoyed her storyline, and I eagerly awaited her chapters.

At the beginning, I liked Vesperi, and by the end, I was expecting more from her. She uses her power, ruthlessness, and past as a way to get away with things. I wanted to like her. I truly did. She has potential to rise above her past and use it for good. Yet she doesn’t.

Same as Vesperi, I enjoyed Janto from the start. He doesn’t use his power as a prince to control others, he seems like a caring man, yet he lets destiny choose who he should love. His character falls flat when he decides to call Serra the “love of his life” while he can’t stop touching, dreaming of, and looking at Vesperi. By the end, I was disappointed in that character arc. The attraction between Janto and Serra is more believable than it is with Vesperi. But these characters’ growth is rather surprising and will draw readers in though.

The author creates a world with two countries that are divided. You get a glimpse of this rivalry in some scenes, but I didn’t get the world building that I expected. Even with some flaws, Wings Unseen kept me wanting to read more. I was invested in the story and needed to know how it unfolds. 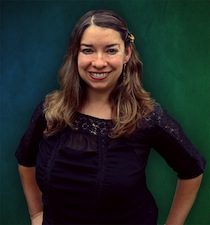 In all but one career aptitude test Rebecca Gomez Farrell has taken, writer has been the #1 result. But when she tastes the salty air and hears the sea lions bark, she wonders if maybe sea captain was the right choice after all. Currently marooned in Oakland, CA, Becca is an associate member of the Science Fiction and Fantasy Writers of America. Her short stories, which run the gamut of speculative fiction genres, have been published by Beneath Ceaseless Skies, Pulp Literature, the Future Fire, Typehouse Literary Magazine, and an upcoming story in theDark, Luminous Wings anthology from Pole to Pole Publishing among others. Maya’s Vacation, her contemporary romance novella, is available from Clean Reads. She is thrilled to have Meerkat Press publish her debut novel.
Becca’s food, drink, and travel writing, which has appeared in local media in CA and NC, can primarily be found at her blog, The Gourmez. For a list of all her published work, fiction and nonfiction, check out her author website at RebeccaGomezFarrell.com.

Enter here for your chance to win a $25 Amazon gift card!