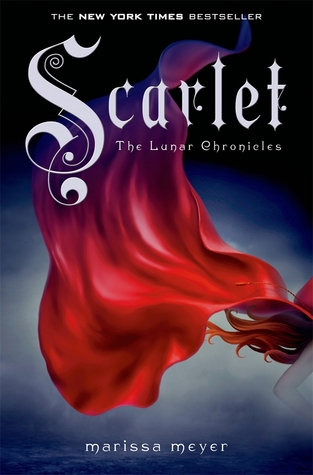 Cinder is back and trying to break out of prison-even though she’ll be the Commonwealth’s most wanted fugitive.

Halfway around the world, Scarlet Benoit’s grandmother is missing. It turns out there are many things Scarlet doesn’t know about her grandmother, or the grave danger she has lived in her whole life. When Scarlet encounters Wolf, a street fighter who may have information as to her grandmother’s whereabouts, she is loath to trust this stranger, but is inexplicably drawn to him, and he to her. As Scarlet and Wolf unravel one mystery, they encounter another when they meet Cinder. Now, all of them must stay one step ahead of the vicious Lunar Queen Levana.

“She did not know that the wolf was a wicked sort of animal, and she was not afraid of him.”

Did I have big expectations with this sequel? Yes. Has Marissa surpassed them? Hell yes. She gives her readers secrets, politics, alpha females, genetically modified beasties, and squeal-worthy love stories. And I can’t help myself with falling in love with this sequel.

I’ve been dreading reading Scarlet’s story. Some readers didn’t like her, while others loved her. Clearly, I’m the latter. So fight me if you think otherwise. Marissa ties together both Cinder’s storyline with Scarlet’s. I wasn’t too sure if I’d like duo arcs, but she effortlessly blends the two together, and I enjoyed how Cinder and Scarlet are connected.

Cinder escapes from jail and is on the run, yet she leaves her heart with Kai. With the help from Wolf, a mysterious street fighter, Scarlet discovers her grandmother is missing and must find her, but the woman she loves may have kept a hidden life. I was hoping for Cinder and Thorne to meet up with Scarlet and Wolf much earlier in the story. Their eventual connection seems to drag on, but the individual storylines make up for that.

Marissa creates multi-dimensional characters. Her characters are flawed yet believable. You can easily relate to their fear, pain, and determination. I did not anticipate liking Scarlet as much as Cinder. That cyborg has a small little piece of my heart, yet Scarlet slid right in there as well. These two female characters are what keep me loving YA series.

While the plot is phenomenal, I feel this sequel is more character driven. What Marissa exceeds in are her characters. You don’t get flat, uninspiring ones; you find ones who make you want to read more. Scarlet is an alpha female who, even when she’s scared, doesn’t stop fighting, and I admire that drive in her and Cinder. But they don’t let their potential love interest overshadow who they are.

One love interest I adore the most is the silence yet deadly type. And Wolf is the epitome of that. He’s dangerous, complex, yet somehow, in his own way, perfect for Scarlet. Yes, I wanted to punch him in a few scenes, but he deserves love as much as any other person. And now, I can officially swoon over Captain Carswell Thorne. I’ll always love the cocky, sarcastic male characters. I’m predictable, but I know what I love. I’ve been waiting for this book since I first heard about him, and he doesn’t disappoint. I also find Cinder and Thorne’s friendship refreshing. It’s what sealed this book for me. It had me laughing well into the night.

I don’t know how some readers rated this book lower. Scarlet offers just enough spunk, sarcasm, science fiction, and love to keep readers screaming for more. Then Marissa adds adrenaline, then heartbreaking yet thrilling scenes. I’m a Lunar fan through and through. This is one fandom I’m here to stay.

One thought on “Review | Scarlet by Marissa Meyer”