June felt slow in one week yet felt it wouldn’t slow down in the other. Now July is here, and I don’t know what to say. For my fellow Canadian bloggers, I want to wish you a Happy Canada Day! And as I write this post, I hear all the fireworks, so they definitely set the mood.

The time has come again where I bloat your already full TBR list even more. Am I sorry? No. But my list/pile would like to give you its condolences. 😂 I haven’t listed all the books but have shown you the ones I’m looking forward to the most.

I hope you find your next favourite release!

Queen of Ruin by Tracy Banghart

A fierce sequel full of sisterhood, heart pounding action, betrayal, and intrigue in the royal court in a series that “breathes new life into the feminist story of oppression and resistance” (Publisher’s Weekly).

Banished by Asa at the end of Grace and Fury, Nomi and Malachi find themselves powerless and headed towards their all-but-certain deaths. Now that Asa sits on the throne, he will stop at nothing to make sure Malachi never sets foot in the palace again. Their only hope is to find Nomi’s sister, Serina, on the prison island of Mount Ruin. But when Nomi and Malachi arrive, it is not the island of conquered, broken women that they expected. It is an island in the grip of revolution, and Serina–polite, submissive Serina–is its leader.

Betrayal, grief, and violence have changed both sisters, and the women of Mount Ruin have their sights set on revenge beyond the confines of their island prison. They plan to sweep across the entire kingdom, issuing in a new age of freedom for all. But first they’ll have to get rid of Asa, and only Nomi knows how.

Separated once again, this time by choice, Nomi and Serina must forge their own paths as they aim to tear down the world they know, and build something better in its place.

I’ve been waiting so long for the sequel! So damn long. I hesitated with Grace and Fury, but it’s one of my favourite reads of 2018. I wonder how the sisterhood dynamic will play out. 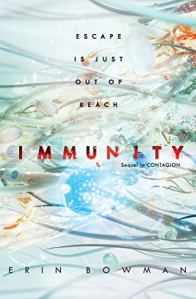 They thought their nightmare was over, but Thea, Coen, and Nova’s rescue was only the beginning. After being imprisoned on a ship they thought was their ticket to safety, it’s clear that the threat they left behind isn’t as distant as they’d hoped—and this time the entire galaxy is at risk.

Now that threat is about to be unleashed as an act of political warfare. To prevent an interstellar catastrophe, the survivors must harness the evil they faced on the planet Achlys and learn to wield the only weapon they have left: themselves.

The first installment in Erin Bowman’s duology earned a starred review from Publishers Weekly, who called the plot “intricate and action-packed,” and fans of Jonathan Maberry, Rick Yancey, and Madeline Roux will relish in Bowman’s tense, high-stakes conclusion to the events of Contagion.

I blame Kal for this choice. But I don’t regret it though. I need more sci-fi/horror books in my life. I have an extreme love for contagious diseases, and having an interplanetary storyline just adds to my curiosity.

Spin the Dawn by Elizabeth Lim

Project Runway meets Mulan in this sweeping YA fantasy about a young girl who poses as a boy to compete for the role of imperial tailor and embarks on an impossible journey to sew three magic dresses, from the sun, the moon, and the stars.

Maia Tamarin dreams of becoming the greatest tailor in the land, but as a girl, the best she can hope for is to marry well. When a royal messenger summons her ailing father, once a tailor of renown, to court, Maia poses as a boy and takes his place. She knows her life is forfeit if her secret is discovered, but she’ll take that risk to achieve her dream and save her family from ruin. There’s just one catch: Maia is one of twelve tailors vying for the job.

Backstabbing and lies run rampant as the tailors compete in challenges to prove their artistry and skill. Maia’s task is further complicated when she draws the attention of the court magician, Edan, whose piercing eyes seem to see straight through her disguise.

And nothing could have prepared her for the final challenge: to sew three magic gowns for the emperor’s reluctant bride-to-be, from the laughter of the sun, the tears of the moon, and the blood of stars. With this impossible task before her, she embarks on a journey to the far reaches of the kingdom, seeking the sun, the moon, and the stars, and finding more than she ever could have imagined.

Excuse me, but I need to pry my jaw off my laptop. Bloggers convinced me to read Spin the Dawn. Even before I read the blurb, I knew I had to read it.

The Storm Crow by Kalyn Josephson 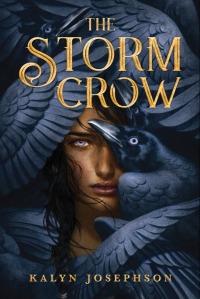 In the tropical kingdom of Rhodaire, magical, elemental Crows are part of every aspect of life…until the Illucian empire invades, destroying everything.

That terrible night has thrown Princess Anthia into a deep depression. Her sister Caliza is busy running the kingdom after their mother’s death, but all Thia can do is think of all she has lost.

But when Caliza is forced to agree to a marriage between Thia and the crown prince of Illucia, Thia is finally spurred into action. And after stumbling upon a hidden Crow egg in the rubble of a rookery, she and her sister devise a dangerous plan to hatch the egg in secret and get back what was taken from them.

The next pick just squeezed in there. I can’t stop staring at the cover. Can we please stare at it a little bit more? I want to see how Kalyn incorporates any crow mythology into her writing. I am down for a revenge story.

Soul of Stars by Ashley Poston

Once, Ana was an orphaned space outlaw. Then she was the Empress of the Iron Kingdom. Now, thought dead by most of the galaxy after she escaped from the dark AI program called the HIVE, Ana is desperate for a way to save Di from the HIVE’s evil clutches and take back her kingdom.

Ana’s only option is to find Starbright, the one person who has hacked into the HIVE and lived to tell the tale. But when Ana’s desperation costs the crew of the Dossier a terrible price, Ana and her friends are sent spiraling through the most perilous reaches of the Iron Kingdom to stop the true arbiter of evil in her world: an ancient world-ending deity called the Great Dark.

Their journey will take the sharp-witted pilot, Jax, to the home he never wanted to return to, and the dangerous fate he left behind. And when Robb finds out who Jax really is, he must contend with his own feelings for the boy he barely knows, and whether he truly belongs with this group of outcasts.

When facing the worst odds, can Ana and her crew of misfits find a way to stop the Great Dark once and for all?

A ragtag gang of misfits? Hell yeah! I have high expectations with Soul of Stars. Now, please just remind me to read the first book. 😂

For a decade Darrow led a revolution against the corrupt color-coded Society. Now, outlawed by the very Republic he founded, he wages a rogue war on Mercury in hopes that he can still salvage the dream of Eo. But as he leaves death and destruction in his wake, is he still the hero who broke the chains? Or will another legend rise to take his place?

Lysander au Lune, the heir in exile, has returned to the Core. Determined to bring peace back to mankind at the edge of his sword, he must overcome or unite the treacherous Gold families of the Core and face down Darrow over the skies of war-torn Mercury.

But theirs are not the only fates hanging in the balance.

On Luna, Mustang, Sovereign of the Republic, campaigns to unite the Republic behind her husband. Beset by political and criminal enemies, can she outwit her opponents in time to save him?

Once a Red refugee, young Lyria now stands accused of treason, and her only hope is a desperate escape with unlikely new allies.

Abducted by a new threat to the Republic, Pax and Electra, the children of Darrow and Sevro, must trust in Ephraim, a thief, for their salvation—and Ephraim must look to them for his chance at redemption.

As alliances shift, break, and re-form—and power is seized, lost, and reclaimed—every player is at risk in a game of conquest that could turn the Rising into a new Dark Age.

In my defence, I want to read Red Rising. But I also want to read Dark Age. What is wrong with me?! I need to stop adding sequels to books I haven’t picked up yet. Bah. I don’t care.

What titles are you anticipating the most in July?

7 thoughts on “Most Anticipated Reads of July 2019”